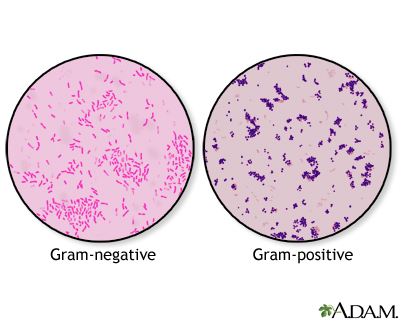 A Gram stain is a test used to help identify bacteria. The tested sample can be taken from body fluids that do not normally contain bacteria, such as blood, urine, or cerebrospinal fluid. A sample can also be taken from the site of a suspected infection, such as the throat, lungs, genitals, or skin. Bacteria are classified as either Gram-positive or Gram-negative, based on how they color in reaction with the Gram stain. The Gram stain is colored purple. When combined with the bacteria in a sample, the stain will either stay purple inside the bacteria (Gram-positive), or it will turn pink (Gram-negative). Examples of Gram-positive bacteria include Streptococcus and Staphylococcus aureus, as well as bacteria that cause anthrax, diphtheria, and toxic shock syndrome. Examples of Gram-negative bacteria include Escherichia coli (E coli), Salmonella, Hemophilus influenzae, as well as many bacteria that cause urinary tract infections, pneumonia, or peritonitis. Gram stain can be done within a few hours. The results help providers choose the first antibiotics to use. Cultures of bacteria help identify specific bacteria, but take days to complete.

We are physicians, hospitals and communities working together to help you live better.