Esophageal atresia is a disorder of the digestive system in which the esophagus does not develop properly. The esophagus is the tube that normally carries food from the mouth to the stomach.

Esophageal atresia (EA) is a congenital defect. This means it occurs before birth. There are several types. In most cases, the upper esophagus ends and does not connect with the lower esophagus and stomach.

Most infants with EA have another defect called tracheoesophageal fistula (TEF). This is an abnormal connection between the esophagus and the windpipe (trachea).

In addition, infants with EA/TEF often have tracheomalacia. This is a weakness and floppiness of the walls of the windpipe, which can cause breathing to sound high-pitched or noisy.

Congenital tracheomalacia is weakness and floppiness of the walls of the windpipe (trachea). Congenital means it is present at birth. Acquired trac...

Some babies with EA/TEF have other defects as well, most commonly heart defects.

Symptoms of EA may include:

Before birth, a mother's ultrasound may show too much amniotic fluid. This can be a sign of EA or other blockage of the baby's digestive tract.

The disorder is usually detected shortly after birth when the infant tries to feed and then coughs, chokes, and turns blue. If EA is suspected, the health care provider will try to pass a small feeding tube through the infant's mouth or nose into the stomach. If the feeding tube can't pass all the way to the stomach, the infant will likely be diagnosed with EA.

An x-ray is then done and will show any of the following:

EA is a surgical emergency. Surgery to repair the esophagus is done as soon as possible after birth so that the lungs are not damaged and the baby can be fed.

Tracheoesophageal fistula and esophageal atresia repair is surgery to repair two birth defects in the esophagus and trachea.

Before the surgery, the baby is not fed by mouth and will need intravenous (IV) nutrition. Care is taken to prevent the baby from breathing secretions into the lungs.

An early diagnosis gives a better chance of a good outcome.

The infant may breathe saliva and other fluids into the lungs, causing aspiration pneumonia, choking, and possibly death.

Other complications may include:

Prematurity may complicate the condition. As noted above, there may also be defects in other areas of the body.

A premature infant is a baby born before 37 completed weeks of gestation (more than 3 weeks before the due date).

This disorder is usually diagnosed shortly after birth.

Call your baby's provider right away if the baby vomits repeatedly after feedings, or if the baby develops breathing difficulties. 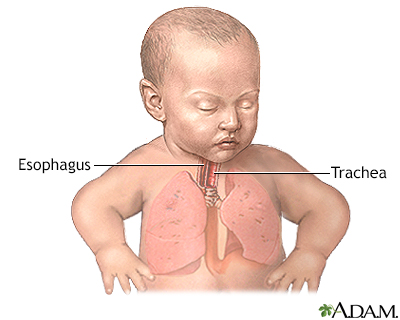 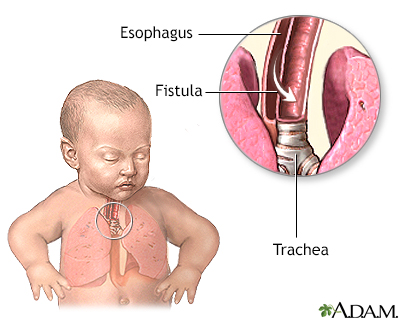 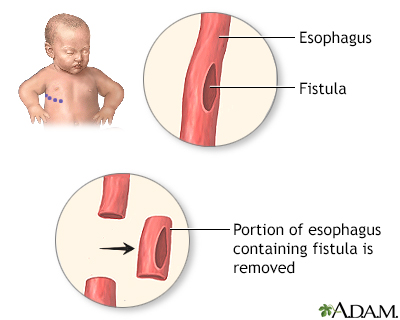 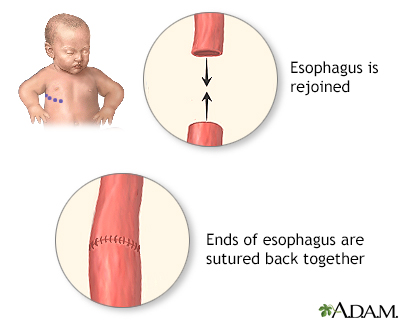 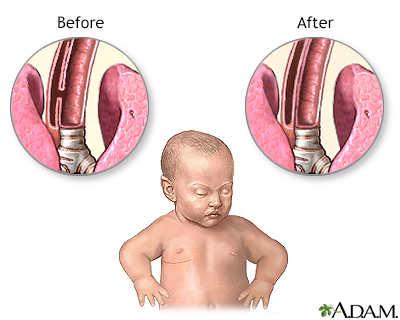